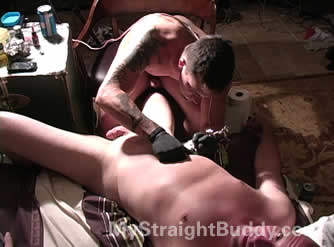 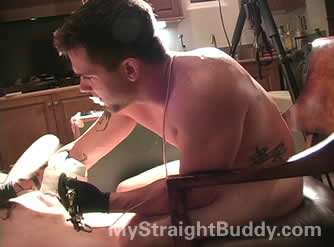 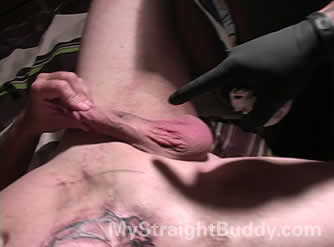 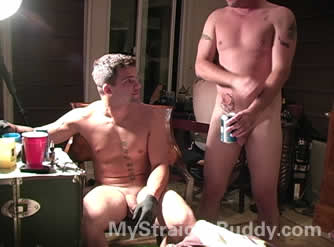 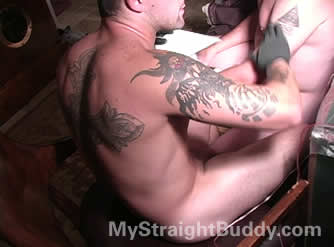 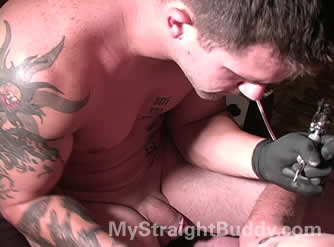 This is the second part of the Naked Tattoo video. It starts out with me describing what happened to a buddy of mine, who woke up one morning and took a piss only to discover that the night before he'd had an american flag and eagle tattooed on his dick. My buddy says this is so someone could "swallow his pride." Now normally the last thing I would ever do would be to get a tattoo needle anywhere my dick, but what the hell...I had been drinking enough to not feel much, and I was always curious about how much it would hurt. The answer is: not as bad as I thought, although my buddy did give me a very small one, just a single chevron. In the marine corps that's a private first class...so then the joke was that my "privates were first class". It's jokes here all day! My buddy Smokey wondered when I would get promoted, but the guys decided I should get an instantaneous meritorious promotion because I was a BAMF...a Bad Ass Motherfucker.

I have to say that I'm really impressed with my buddy Smokey's and his friend's camera work. Smokey's buddy, a marine I had never met before, handled most of it and did a great job. Even at one point when Smokey and I were outside discussing something conducting a little interview with my buddy...how long had been tattooing, and so on. Smokey took the camera for a minute when his buddy went in to get beer and he's just a crack up at all times. Then the tattooing was over and I got a look. I wanted him to fill everything in but that'll have to wait for a later day, but whatever. And I finally got to look at the special tatt that he designed for me that represented out friendship. This was a very special shoot for me, because right after this my buddy got out of the Corps and went home. But I'll always remember him and this shoot every time I look in a mirror and see the work that he did.