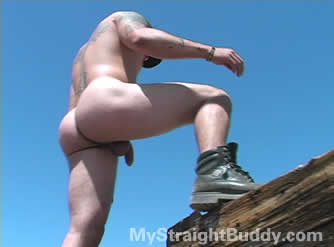 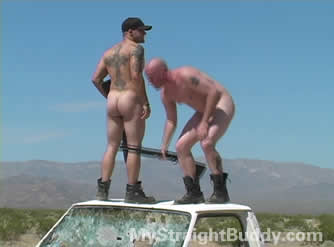 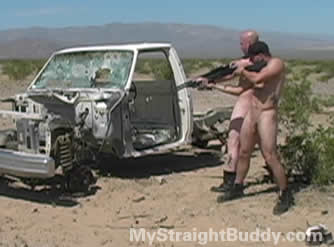 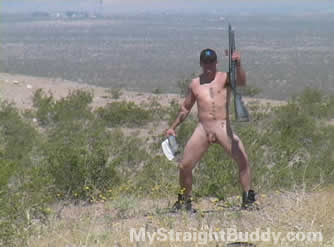 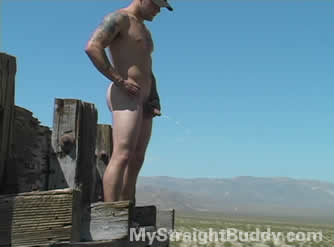 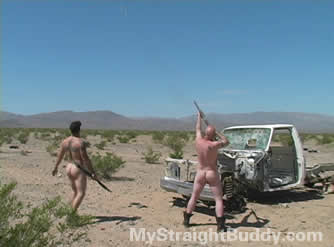 If I have a favorite spot to hang out in the desert, it's got to be the abandoned mine outside of town. you've seen it before in some videos with Zack. It's far enough out of town that no one's going to bother you while you're out there, and yet it's totally accesible even if you don't have a 4-wheel drive. Lots of people must think the same thing, because the area is littered with about a ton of crap that people have dropped off and then shot at. I have to admit that I think it sucks that people dump their shit out there, because otherwise the view up on that hill is amazing and it would be a beautiful place to enjoy nature. But the shit's there, and if it's there, we might as well shoot at it. Naked.

Both me and my buddy were feeling some stress one Saturday afternoon, me from work and him from his girl, who he'd just had a very frustrating conversation with. He and I generally have the same solution for frustration...get out the shotties and blow some holes in some shit. So we went back to the mines. Well, mine, anyway. The first thing we noticed was that someone had left a who truck there, so immediately we knew what we'd be expending our ammo on. The second thing we noticed was that we were wearing too many clothes. That's right, both of us this time. Matt was always having all the fun, but I like to run around naked just as much as he does. We're about as tight as bros as you can imagine and we're both totally comfortable letting it all hang out in front of each other, and we both fucking hate wearing clothes, almost as much as we love shooting stuff with out shotguns.

Now I realize that some of you may not enjoy the violence and gunplay. But that's what straight military guys like to do...they like to shoot shit and fuck girls. And drink beer. So we blew the shit out of this truck, basically. I have to say it was amazing being out there in the open desert, the weather was about perfect and it felt great to hike the rather long way from Matt's truck down the hill to the target vehicle. I love being naked out in the open, far away from safety. Occasionally Matt would hear a noise and worry that someone was coming, until I reminded him, "Let them come, we have shotguns--what are they gonna do?" Run, probably. You can tell in this video how tight Matt and I are and how chill we are around each other. We climbed all over that truck naked, threw stuff up in the air for each other to get shot (that's my old graphics tablet that stopped working that I can't seem to hit), and generally had a great time.