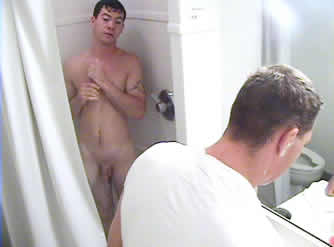 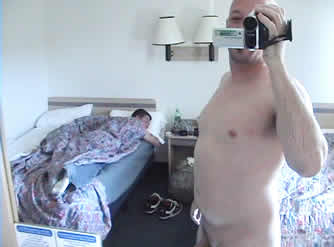 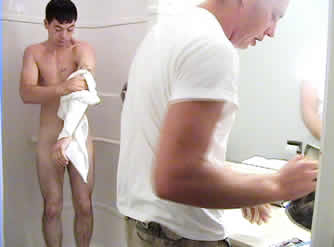 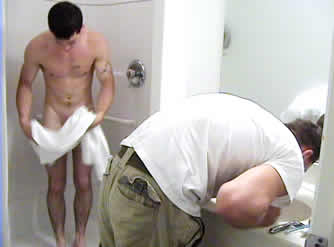 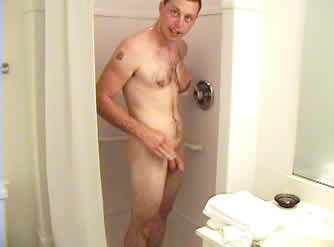 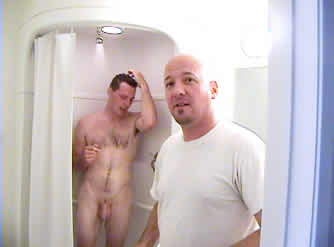 I shot this video of the guys waking up and getting ready one random morning on the roadtrip. There's little shenanigans in this video...instead this one is about guys being comfortable in front of their friends.

This happened on the last full day of the trip on the way to King's home town. We'd been on the road for awhile, had our fun in Wells, Nevada (great place), and had meant to drive straight through to home, but when we got to Cheyenne, Wyoming and realized how far we still had to go we decided to stop for the night. We got in late, it was a clusterfuck at the front desk, and we all crashed watching Mission Impossible 3 (suuuuuck).

I had totally forgot until I watched the tape again after we got back that I actually start out naked in this one, although you only catch a glimpse of it in the mirror. We had overslept because King's Blackberry ran out of juice during the night, unbelievably I I was actually the one who got up first. When I got out of the shower I picked up the video camera instead of my clothes, and turned it on the guys as I tried to get them up.

It wasn't that hard, they were already mostly conscious already. Zack steps out o the balcony walkway for a minute to grab a morning smoke and I end up talking to him for a minute out there, the door wide open and me totally naked, unfortunately for you guys Zack has his jeans on.

Then Zack hits the showers, but we're running so late that King has to cram into the bathroom with him to do his morning routine at the same time. We've been on the road for several days at this point though so we are all totally comfortable naked in front of one another...hell, the day before in Wells, Nevada they were actually in the shower together.

Lucky for you the shower in this Motel 6 is a standing stall shower and the head actually points inward, enabling Zack to open the curtain so he can talk to us.

When he's done it's King's turn.