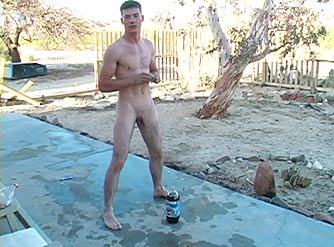 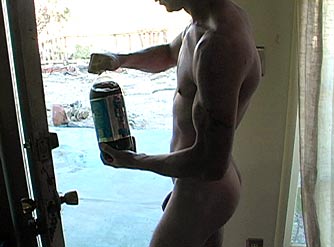 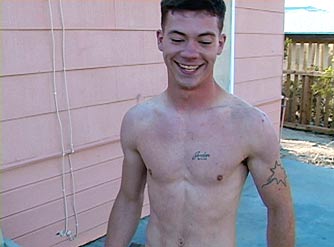 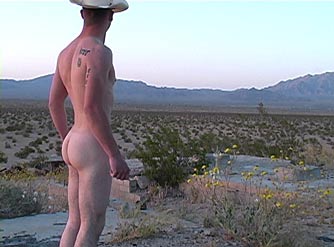 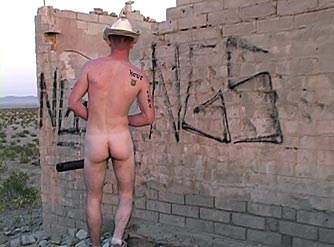 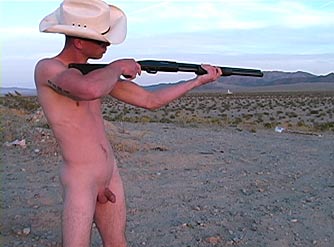 My buddy Zack loves to be naked. Almost any excuse will do. Lately when he gets off duty he's been coming over to my pad so he can enjoy a clothes-free lifestyle, and he lets me tape everything. I hope y'all are enjoying it.

Last Monday he came over to hang out and we got to talking about YouTube videos, and I mentioned the famous "Mentos and Diet Coke" videos from aw while back. He had never heard of them, had no idea what happened when you drop Mentos in Diet Coke. Answer: it instantly shoots a fountain of Diet Coke about 25 feet in the air. Most of the time you have to drop the Mentos in and run, but we had a better idea...he should do it naked.

So he did. He strips down outdoors on my front porch, get ready and lets the bomb drop, only he's actually holding the Coke bottle in his hands. It makes a huge fountain of Diet Coke that rains down all over him, covering his tight naked body in soda.

Then he heads inside to take a shower so he can wash it all off, and I tape him doing that. He's getting really used to having a camera on him all the time.

After that he finds a box of unused shotgun shells on the table and wants to go out shooting again. I happen to have a rental car and so I suggest that we go out to the boonies somewhere and shoot out there. So he just heads out the door, totally naked, shotgun in hand.

We drive out a ways down and there's an abandoned mine that's off the highway a bit (the highway itself sees one car about every 5 minutes, it's not like an interstate or anything), so we drive up there. There was a semi-trailer parked at the turn-off that we didn't pay much attention to, but when Zack gets out of the car the first thing he sees is a dune buggy coming at us, so we have to flee the scene pretty quick. There's a funny bit where we're being chased by the dune buggy and Zack realizes he has no clothes with him at all.

Fortunately the dune buggy drove up into a trailer in back of the semi and once it was gone we just headed back to the mine. Zack let off a few shots at some already-well-shot-at debris, there's not much to do in the desert but drink and shoot at shit so we were not the first to have that idea.

Then he wanders around, gets disappointed that the mine is sealed shut (probably with people like Zack in mind), climbs around on some shit, checks out the immense view and points out the outpost of civilization that is in clear view but too far away to see us clearly. After smoking a cig we get back in the car and drive home, where he reloads the shotgun and then (reluctantly) puts on his clothes so we can head out and get something to eat.