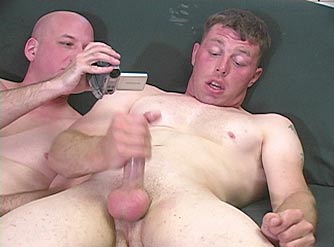 So once again we end up back at my place, drinking heavily and generally acting stoopid. We ended up making an MRE bomb. King can get MRE, Meals Ready to Eat (AKA Meals Ready to Excrete and Meals Rejected by Everyone), which are modern military rations. Back when I was in the service they just came out with a new invention, which was a heater that worked with water. If you crush one up and put it in a bottle, then add water and screw on the capboom! So we did that, and you can watch the video.

Bored and looking for something to do we pulled out a pack of cards we had picked up the last time we were in Vegas. I lost my hand pretty bad and my 'punishment' was I had to go streaking around my house. It's fun no matter what, but of course I was like, let's grab the video camera!

So we end up both going streaking around my house. He makes a big show of not wanting to do it but you can tell that's all bullshit and I call him on it. I knew perfectly well that he really wanted to do it. He fucking loves to be naked. Now that's a marine after my own heart.

Once that was done, neither of us wanted to put on our clothes, we both like being naked so much, and neither one of us has any problems being naked around the other. It's like we're brothers almost. I say almost, 'cuz every time we get naked and drinking we end up doing stuff with each other.

King's back was killing him. A bunch of trucks got stuck in the mud and he had to carry (or hump, they call it) boxes of MRE through a field of mud in the hot sun for the troops in his platoon. A couple beers in, and King didn't care who was rubbing his back, or that we were both totally naked. We had also just been talking about his large his cock is and he wanted to measure it. So as I start working on his backwhich is actually too broad and hard to even get any traction on, it's like trying to massage a doorhe starts working up his cock so he can "see how big my shit is". Trust me dude, I've had that thing up my assit's big.

Our evening went on so long that by this time the sun is rising. This doesn't deter either one of us from going outside with our cocks flopping out. If you like watching guys just hang out naked, and especially if you like to see a guy smoking, you'll love this part. Actually come to think of it, I think every video has a scene where he's outside smoking...this is the first one where you can actually see outside though, 'cuz the sun is up.

We weren't gonna finish this one without a cum shot though. We arranged the cameras and sat next to each other on my couch. Since we're totally cool with each other I suggested we trade cocks, so he soon he was beating me off and I was working over his shaft with my left hand. Man he was doing a great job of it too, my bro really knows how to jerk off, I'll say that. You can really see how much fun we're giving each other, it's almost explosive. It's because we're such tight bros...it's not like watching two models go at it, it's watching two best buddies really go at it. I have to admit it's pretty fucking hot to watch.