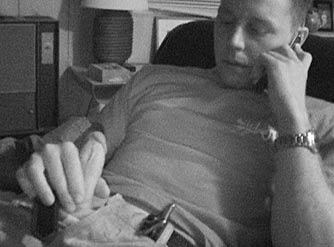 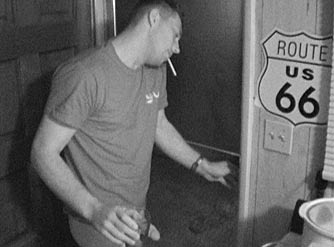 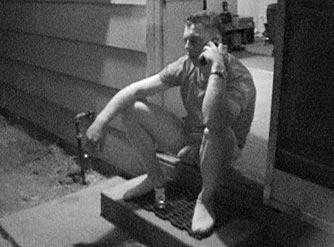 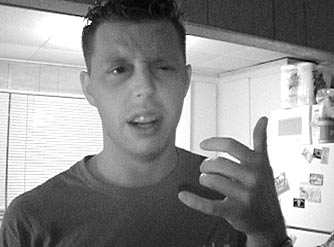 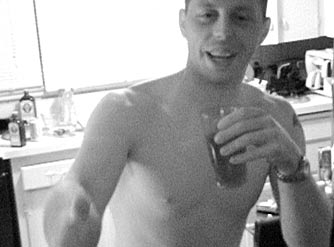 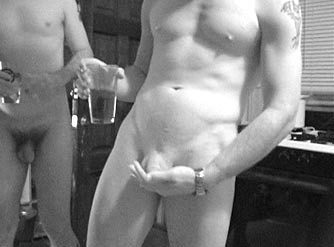 King and I had just gotten back from Vegas a few hours before. I basically had to take him because of all the crazy fucked up shit we ended up doing during Night One. Basically I had to take him to a strip club in Vegas so he could A: remind himself that he was really straight and B: cleanse the memories of playing with me by having titties rubbed in his face.

On the other hand, on the way back from the grocery store getting more Jagermeister, King gets a call from his ex-fiancee. She left him with a broken heart maybe two months before, now she's changed her mind and she wants to come back to him!

Luckily, this doesn't change King's mind about doing the videos.

In fact, this video starts off with him talking to her. Only, as he's talking to her, he unbuttons his jeans and starts playing with himself. Pretty soon he's rock hard and showing off his long, thick cock to the camera as he chats with her on his cell phone. When he takes off his pants, he tells her he's climbing into bed because he's tired.

The thing that's awesome about my buddy King is: every time he wants to smoke a cigarette he goes outside naked. This time he has his shirt on still, but his dick is poking out from beneath. Like a banana. It's fucking huge!

He finished up his conversation on my front step, balls hanging out the whole time. When he finally hangs up he heads inside and I have him explain the whole situation and what just happened as he makes us some more Jager Bombs.

Just a few weeks prior King had a girl visiting him but staying at my place. In fact, the fact that she was staying with me and she was a crazy insane bitch is one of the reasons he's helping me make videos--he owes me. Once he got rid of her, he already had another girl lined up and ready to go. Now his ex-fiancee has just called wanting to get back with him. He explains the whole scenario while he makes our drinks, wearing nothing but a t-shirt.

Well, until he realizes that he's wearing it and takes it off.