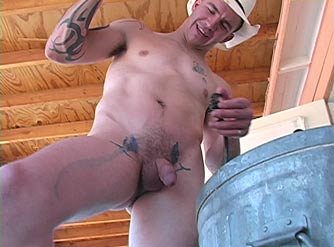 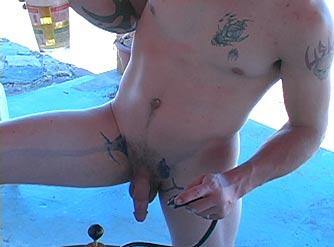 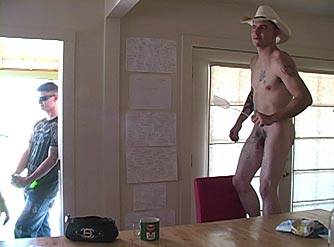 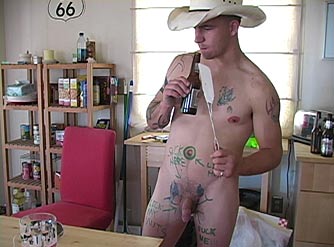 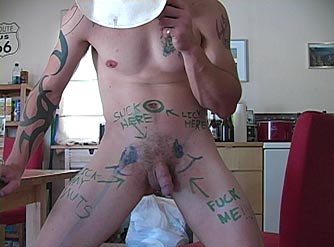 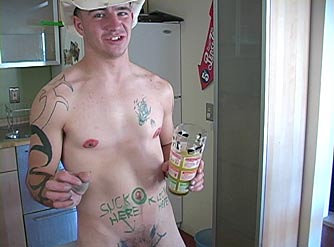 Josh and I have been tight bros for a while, and when we get together we talk about a whole range of shit, especially when we've been drinking.

Scene 1 is proof that MyStraigtBuddy is like no other site in existence, as you get to listen to a marine's take on politics and the current state of gas prices in America while slicing a pizza. we get to talking about Obama and his chances to become president and how the Powers That Be will feel about this turn of events. We decide that there should be a new cabinet-level position, the secretary of Common sense, staffed by Josh of course. We also notice that today Josh is a shower, instead of being a grower...it looks like his cock has grown at least an inch or so since the last time.

Scene 2 is where we run out of beer. Well, in bottled form anyway, there's still half a keg out there left over from the party the night before. You'll love watching Josh pumping the keg but it's useless...it's all foam and the beer is undrinkably flat, even for guys that are out of beer. Josh sure does like to show off his hot body though, "I'd say it looks pretty sexy too" is his comment and he's right. And then he starts flopping it around like its cool to the tune of "Peanut Butter Jelly Time". There's lots of shots of Josh's junk, which he's very proud to show off.

At the end of this scene he grabs the marker again and writes out a set of instructions: "Lick Here ->", "Suck Here ->" and so on.

Scene 3: Josh admires his handiwork and sends cellphone pics of it to his friends, 'cuz he's crazy like that. Pretty soon he's getting some funny "WTF" texts back. I zoom in on his dick so you can see every vein and detail. We decide that the shit he's written on himself are instructions in case he passes out, girls will know what to do. Josh really likes to show off, particularly how well defined his calves and biceps are, and how he can make his veins bulge out on his arms. In fact he's showing off when two of our friends show up, the one guy (also a marine) is like, "OMG they're both naked..." and so we are.

Scene 4 is mostly Josh stalking flies in my kitchen, while our two friends chat away like "whatever". Josh also reveals that one of his favorite things to do is play with his ass cheeks. You won't mind watching him do it, either.

Scene 5 wraps up with Josh making some kind of new drink concoction out of the leftover juices and alcohols in my fridge. It's surprisingly good but it has quite a kick to it. Then he gets back to showing off his hot body, which the camera explores in close-up. I'm sure you've seen a lot of naked guys but not like this, so up close and personal. Again he's especially proud of the way his veins stand out, even against the dark background of his tribal tattoo.

home
movies
236 original downloadable videos
iPhone
30 videos straight off my iPhone
free vids
Behind the scenes videos
buddies
All my straight buddies
help
Members get access to my Private Snapchat!!

Copyright © 2007-2021 —All Rights Reserved. All models at least 18 years of age at time of photography. Proof of age and other pertinent records required by 18 U.S.C., Sections 2257 of title 18 is kept by the Custodian of the Records